Happy Lunar New Year and hope everyone is doing well!
We would like to share with you the following event that has good information for Asian and new immigrant community organizers.

(No registration is required)

Dr. Brown, will be sharing his three decades of experience and efforts in bringing services and improvements to the Rising Sun Avenue Commercial Corridor in Northeast Philadelphia, in how he gains public resources and support from elected officials, and unites the community stakeholders to improve the streetscape, public safety, sanitation, parking issues, etc.

Hosted by the Philadelphia Chinese Chamber of Commerce (PCCC)

with the support of the Northeast Philadelphia Chinese Association (NEPCA) 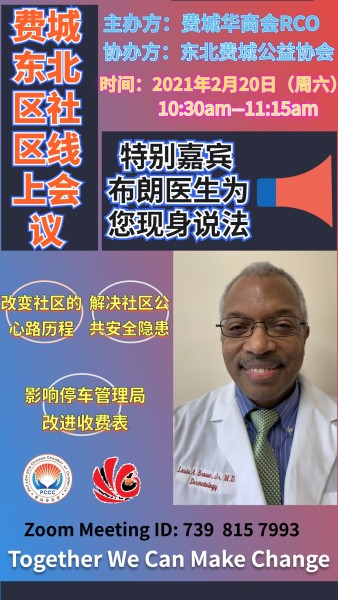 Transcript of Dr. Louis A. Brown

Speech to the Philadelphia Chinese Chamber of Commerce on February 20, 2021

It is with both an honor and with great humility that I have accepted this opportunity from my dear friend, Mingchu Pearl Huynh to present to the Philadelphia Chinese Chamber of Commerce regarding my efforts to help revitalize the Rising Sun Avenue Business Corridor, where my dermatology practice has resided for over three decades.

Before discussing these revitalization efforts, I will first tell you a little about myself and then tell of the profound respect I have both for history and accomplishments of Chinese people in Philadelphia and beyond.

I was born and raised in New York City where in my first eighteen year I resided in a low income housing project called the Washington Houses, in East Harlem, in the borough of Manhattan. My divorced mother Henrietta Brown raised my two older sisters and me in a cramped two bedroom apartment on the fourteenth floor of a high rise building. From this humble background, the caring guidance of a loving mother and supportive sisters I embarked on my academic journey. I excelled academically through the New York City Public School system, ultimately graduating from the prestigious Stuyvesant High School. From there I attended Princeton University from which I graduated with a degree in chemistry. I then entered the University of Pennsylvania School of Medicine. While there I did research on a skin condition affecting Africian-American males who shave their faces, called pseudofolliculitis barbae. Following a one year internship in internal medicine at Lankenau Hospital on Philadelphia’s Main Line, I commenced my dermatology residency at Howard University Hospital in Washington D.C. which historically has trained legends of Africian-American physicians. While at Howard I published research on both previous research on pseudofolliculitis barbae and research at Howard for another condition affecting African-Americans called keloids.

When Lawndale Community Hospital closed in the early Nineties, I moved my dermatology practice to its current location just south of Levick Street on Rising Sun Avenue. As this community went through a demographic change, as many ethnic whites such as the Irish, Germans, Poles, and Italians moved out the suburbs; they were replaced by a more diverse population including African-Americans, Puerto Ricans, Mexicans, Chinese, Vietnamese, Cambodians, Middle Easterners, Indians, Pakistanis, Haitians, Brazilians and a multitude of other racial and ethnic groups. I had the opportunity to treat all of these individuals, including the white patients who continued to stay in the community, or who had returned from the suburbs for my dermatologic care.

As this demographic change was occurring, I was approached by stakeholders such as community leaders and local politicians to see if I would be interested in helping to revitalize the Rising Sun Avenue Business Corridor. I leapt at that opportunity and initially worked on a Project called the Rising Sun Avenue Revitalization Project created by Mark Orehowsky. That ambitious project sought to transform the streetscape of Rising Sun Avenue through sponsorship of both the City of Philadelphia and the State of Pennsylvania. I even redesigned my medical office building to conform with the facade design recommended by the consultants for this Project. The City was helpful in paying for this office renovation through its grant program within the Commerce Department called the Commercial Building Facade Improvement Program.

I then endeavored to work with community stakeholders to bring services and physical improvements to the Rising Sun Avenue Business Corridor. The election of Councilwoman Cherelle Parker in 2016 to the Ninth Councilmanic District where my office resides, started a long and successful process of revitalizing our Business Corridor. Knowing Councilwoman Parker from her days as an assistant to Councilwoman Tasco, she approached me to organize the business owners on Rising Sun Avenue to help improve the Business Corridor. Since most commercial property owners did not actually live in the area, and the business owners did not own their buildings, I found it hard to convince either parties to make physical improvements to their properties.

To overcome this impediment I commenced on a one man strategy to bring about change for issues that would have universal acceptance such as public safety, clean streets and aesthetic improvements of the streetscapes.

One of my first projects was to deal with the problem of public safety for pedestrians at the intersection of Rising Sun Avenue and Levick Street, a major East-West, North South crossroad in which motorists paid little heed to the safety of pedestrians attempting to legally cross the street. In fact, after having been almost hit by cars personally, while crossing at this intersection, I sprang to action to campaign to have a Red Light Camera installed at that intersection. By requesting legislative support from Councilwoman Parker, petitioning local businesses and residents, obtaining traffic studies, and finally testifying at City Council, I was able to win approval from both the Philadelphia City Council and Mayor Kenney. That Red Light Camera costing in excess of five million dollars was installed in 2019 and made a dramatic improvement in pedestrian and motorist safety.

On another matter of public safety, I fought to get police surveillance cameras for the Rising Sun Avenue Business Corridor. I followed the accepted protocol of requesting that the Police Captain at that time, for the Second Police District, Thomas McCain, send a formal request for a camera at the Rising Sun Avenue and Levick Street intersection. That request was rejected by the Police Department, however I was assured that funds from the Commerce Department would cover such an installation. When it did not appear that that funding would come through, I almost gave up in despair, when miraculously, a camera appeared one day. Neither the Police nor the Commerce Department was aware, so I sent a thank you letter to Mayor Kenney.

Subsequent to that minor victory, I became incensed to find that Castor Avenue Business Corridor had received fourteen police surveillance cameras funded by the Commerce Department. I expressed my displeasure to all of the governmental stakeholders I could think of. I then circulated a petition requesting more police surveillance cameras on Rising Sun Avenue, Levick Street, as well as a police substation on the 6000 block of Rising Sun Avenue. Lo and behold Rising Sun Avenue was bestowed with twenty one police surveillance cameras. The request for a Police station has previously been rejected by the highest Police Department officials, however recent homicides have made that need more pressing; and I am still campaigning to have a local Police Substation run by either the Philadelphia Police Department or the Pennsylvania State Police.

On another front I became incensed by the number of parking tickets that my patients were receiving from faulty parking meters despite putting in the proper coinage. When I received a ticket for the same reason my anger was transferred to requesting that the Pennsylvanian Attorney General investigate the Philadelphia Parking Authority (PPA) for fraud; for knowingly issuing parking violation tickets at spaces where the parking officers knew the meters were malfunctioning. In response to that threat, PPA sped up their plans to bring the parking pay by phone option to not only the Rising Sun Avenue Business Corridor, but to all similar business corridors throughout the City of Philadelphia. That effort was followed by a petition I circulated the following year to request the installation of parking kiosks instead of the notoriously malfunctioning mechanical meters since many people did not use their cell phones to pay. In August of 2019, PPA agreed to replace the faulty parking meters in the City of Philadelphia with more reliable kiosks starting in the fall of 2019. Our Northeast area is slated to get these more reliable kiosks by the Fall of 2021 according to a high ranking PPA official.

As for clean streets, I have supported both Representative Jared Solomon and Councilwoman Cherelle Parker in their initiatives to bring State and City funding to routine Business Corridor street cleaning. To show my support for these initiatives I contributed financially to early street cleaning efforts, and more recently I have regularly swept and removed trash and debris from both the 6300 Block of Rising Sun Avenue where my office resides and the adjacent residential side streets to augment the wonderful efforts supplied by the governmental street cleaning contractors.

One last civic endeavor has been to enhance the appearance of the Rising Sun Avenue Business Corridor. Along these lines I have worked very closely with Mural Arts Philadelphia to create a mural to be placed at the Rising Sun Avenue and Levick Street Intersection. This is an ongoing effort and one which I would very much appreciate the Chinese Communities assistance in both financially and artistically in bringing to fruition. Such a mural and many more like it would help to visually enhance the appearance of our Business Corridor. These murals along with the street banner program planned for Castor and Bustleton Business Corridors supported by both Representative Jared Solomon and Councilwoman Cherelle Parker would go a long way to defining our Northeast neighborhood and give it a “Pride of Place”.

In closing I would be remiss if I did not recognize the hard and dedicated work of the standouts within the Philadelphia Chinese Community such as Mingchu Pearl Huynh, Dr. Yingzhang Lin, Dr. Allan Wong ，Mr. Richard Li and Mr. Jason Lam to name just a few. Unlike many of our citizens of Philadelphia, I have been something of an historian of the great strides of Chinese people dating back to over 5000 years ago. I am aware of the outstanding inventions which the Chinese people have brought to the world’s civilization. But also, am also aware of how Chinese were humiliated by Western and Japanese Civilizations in recent centuries; and how your indomitable people have fought back and reclaimed their righteous place as major contributors to society. As an African-American, I too look to see the realization of Dr. Martin Luther King's message of social justice for people of all race, creeds and ethnicities.

That said, I can only advise the Philadelphia Chinese Chamber of Commerce to continue to do what you are doing. Specifically, continue to reach out to your fellow citizens of all races, ethnicities and religions and continue to build coalitions. Continue to invest and maintain your businesses. Continue to nurture and educate your children as you have so able done. Continue to vote and support politicians who have your interest, and the interest of the City of Philadelphia at heart.

I have shared my experiences with you, but I too hold much respect for what the Chinese community has done to revitalize our Great City of Philadelphia. I have no doubt that your hardworking and generous community will continue to make its mark by adding your talents and investments in helping Philadelphia, the birthplace of American democracy, maintain its righteous position as one of the greatest Cities in America, if not the world.

Thank you for allowing me this opportunity to address such a distinguished and honored organization as the Philadelphia Chinese Chamber of Commerce.

Popular posts from this blog 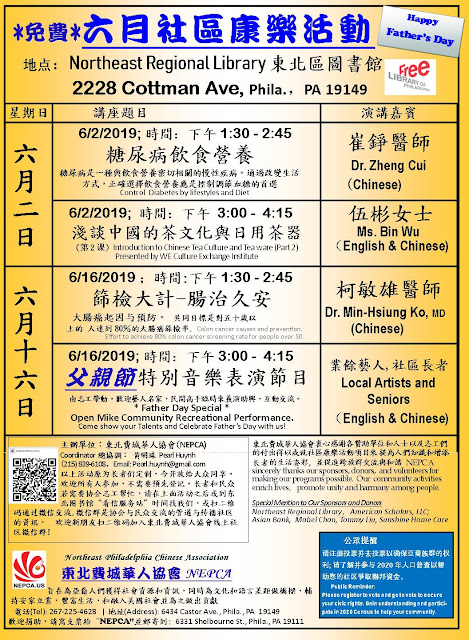 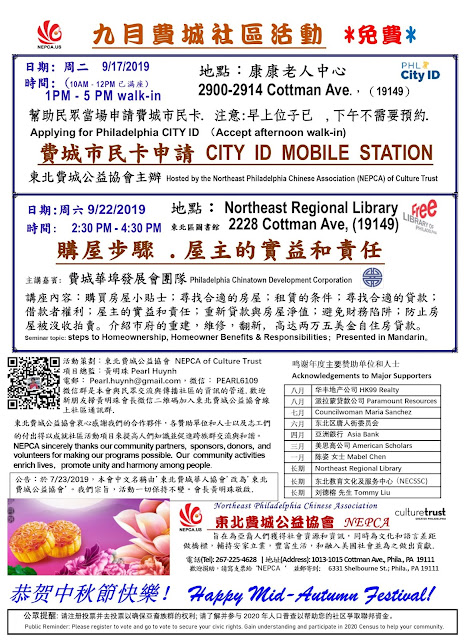 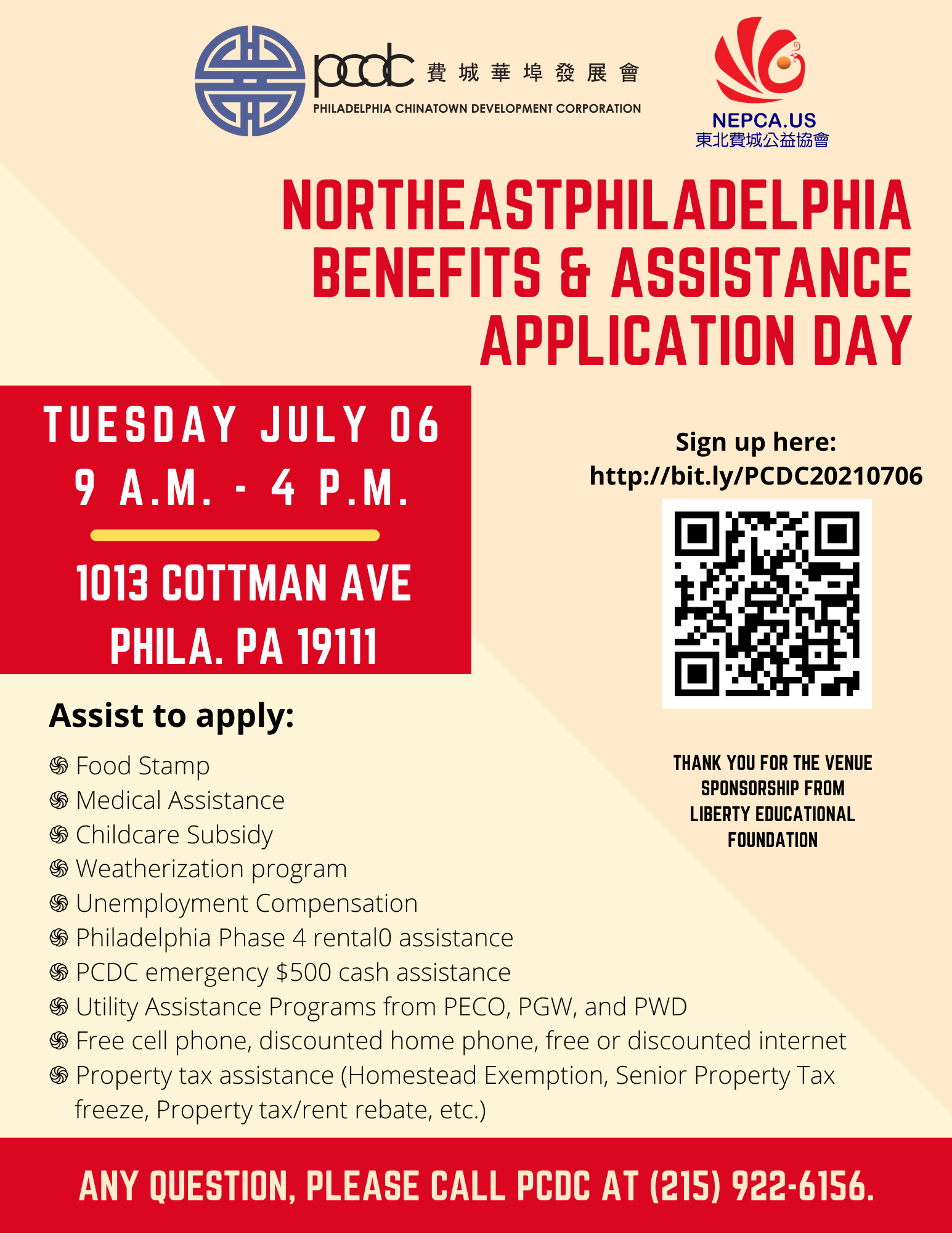